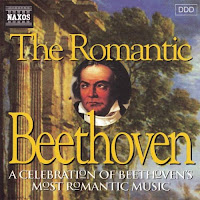 Around 1812 Beethoven wrote a long letter (10 pages) to some woman who he was obviously quite taken with.  Sadly we will never know for certain who it was.  However the letter itself was discovered after Beethoven's death in a secret drawer where he also kept the Heiligenstadt Testament, some savings and some pictures.  Based on these images, I feel that these were a "rough draft" copy which he then copied out in a neater style and then sent to the lady in question.  That would explain why he had a copy in his desk.

Or maybe Beethoven found out she slept with Daniel Steibelt and he never sent it - who knows?

Here is the "Immortal Beloved Letter" - click on the images for a larger size:
(Translated text from Dominique Prevot's superb site.
I'm not going to write more about the Immortal Beloved, there's plenty of material out there on it (including a fascinating and possibly libelous movie with Gary Oldman) but despite several biographer's attempts we may never know who she was, if she ever got this letter, or how she replied.  Yet he saved it till his dying day....