Talk about a volatile market.

The below prices derived from B's letters, Thayer's book and a couple other miscellaneous biographies.  Also it was hard to tell from one source to another whether they had adjusted the numbers in translation, so these are by no means gospel... 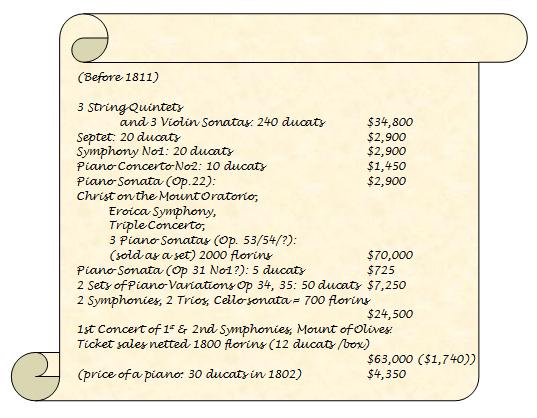 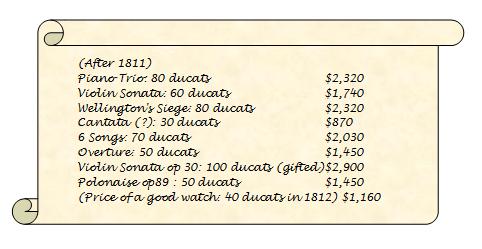 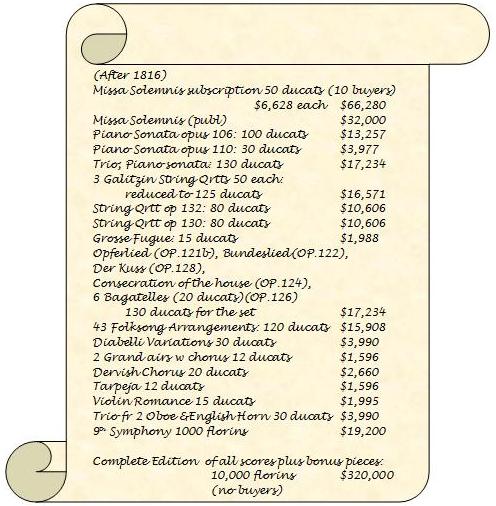 (The Complete Works for the price of a small house....hmmm.  Then again, considering the amount of airplay he's gotten over the last 200 years - maybe that's a steal?)


In should be noted that these prices were for different publishers and if there was a lady involved she would get a significant discount.  That may explain why Opus 110 is much cheaper than 106 (oh wait, Op.106 is the Hammerklavier, never mind).  Also B would sell the same work in different countries so he could have made the same amount 3 times over what is noted above when all sales were accounted for. And finally, some prices quoted are for "subscriptions" which meant the buyer could have a limited edition copy for a set amount of time (an "exclusive" of sorts).

Here's some info on B's finances from The Bonn Beethoven museum.

Now for a report from someone who is an actual authority (copied from the LUTE maillist at Dartmouth University):


Thu, 23 Oct 2003 19:02:41 -0700
This was posted to the musicology list, and may be of interest in light of
our recent discussions.  I forgot to mention that there was a cponference
at NYU a few years back titled "Thr Mu$ic Bu$ine$$ in the 18th Century."
John Kmetz organized it, but I had to leave before the interting paper on
the value of money was read.
Bill Meredith heads the Beetoven Center of the U of Califonia, San Jose.
He's mentioned prominently in that true detective story about Beethoven's
hair.  (Nice summertime read.)
AJN
---------- Forwarded Message ----------
RE:     Beethoven currency query
From: Bill Meredith <[EMAIL PROTECTED]>
To: [EMAIL PROTECTED]
Subject: Beethoven currency query
Dear Gail (and those interested):
The question of currencies and today's money often comes up at the
Beethoven Center. Unfortunately, there is no satisfactory way to say that
one florin would equal so much in dollars today.
What we have found works very well instead is to explain to elementary
school teachers and adults and everybody that from the amount of money
Beethoven received for a work, he could have paid for half a year's worth
of rent on his apartment in Vienna, for example, or he could have bought so
many chickens for his table. The ratonale behind this is that some things
were very expensive in Vienna because they were in severely limited supply
(rent), others reasonable (some foods, but not all). Julie Moore, in her
wonderful dissertation that should have been published as a monograph long
ago ("Beethoven and Musical Economics") discusses all of this -- and much
more -- in wonderful detail.
For example, Beethoven received 100 gold ducats for the Fifth and Sixth
Symphonies (Opuses 67 and 68); the Cello Sonata, Opus 69; and the two
Pianoforte Trios, Opus 70, from Breitkopf & Haertel around September 14,
1808. Thus, if you divide the sum earned by the four opus numbers evenly
(questionable but workable enough for our purposes, and publishers probably
made more on chamber music than symphonies), each opus number was worth 25
gold ducats. Beethoven's rent for his apartment in the Pasqualati House
that year was 500 Florins Bankozettel (Moore, p. 194). If I did the math
right (using the exhange rate of 1 gold ducat = 4.5 florins
Conventionsmuenze and using the inflation rate for 1808 that 100 CM florins
- 228.15 BZ florins), 25 gold ducats was worth 256 Florins BZ, which means
that he earned half a year's rent for each opus number, or two years of
rent for the five works. A chicken cost between 72-120 Kreuzer BZ in Vienna
in 1808 (Moore, p. 549), so Beethoven could have bought a chicken for
Sunday dinner every week for a little more than year (using the upper cost
of a chicken) from what he made from one of the opus numbers. (Or 85
chickens at the cheaper price.)
I have to confess that I am not an expert in these Viennese currencies,
(especially with the complication of the inflation rates), so if anyone
needs to correct my math, please let us all know (I'm serious about this).
(Dr. Moore should really be the one doing this math, but I don't think she
is on the list.)
A one bedroom spacious apartment in San Francisco similar to Beethoven's
expensive Vienna apartment in 1808 rents for about $1,800 today, so you
could say that he earned about $10,800 in rent money for contemporary US
dollars for the Fifth Symphony. (As is still true, apartments inside what
became the ring in Vienna were much more expensive that ones outside the
wall.) A chicken in the Bay area costs about $4-6, which means that he
earned $284 in food money. This gap shows the problem with trying to say
what 25 gold ducats would be today, since what money is worth is of course
related to what things cost.
Bill Meredith