Something lighter today after the epic Waldstein:

B. did quite alot of folksong arrangements, among them Welsh, English, Scottish, Russian, Spanish, etc... He was asked by George Thompson to set various trad. melodies to small chamber ensembles for amateur performance. He added some very imaginative intros and codas to these otherwise innocuous melodies. In fact one was rejected because it was too hard to play (one about a nightingale I think).
Here is an Austrian folk song arrangement which is pretty 'cute'. In fact the first time I heard it I thought my iPod had skipped to a Doors song...

Apparently composed for piano trio this harpsichord version has a unique quality. 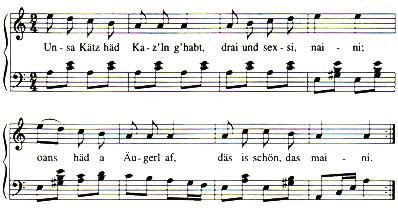 (Sung by Volker Horn with harpsichord by Hans Hilsdorf)

Our cat's had kittens
63 of them, all mine
one of them has stripes
that's the one for me.